My introduction to reflexology came when I was in a very difficult medical time in my life. I had been dealing with

adult-onset epilepsy with grand mal seizures that had started out of the blue in my late 20’s and had gone on for 30 years. In the beginning, it was fairly controlled by medication and life style changes, but as years passed, seizure activity began to increase and become very unpredictable.  Medication was unable to curb the seizures, and ultimately I lost my ability to drive for 5 years. At this time and as a result of not being able to drive, I also lost my job as a project manager and vendor relations rep for my company, which required me to do site visits to our partner shops and factories.

In 2016 the seizure activity dramatically increased by about 30%. My doctors had no answers and began prescribing various medicine combinations to get better coverage. I was having grand mal seizures every 4-6 weeks and auras (small, focal seizures that did not escalate to large seizures) 4-5 times a month. On top of that, the increase in meds seemed to actually make the seizures worse. Some medication seemed to help a little, but higher doses or multiple meds layered together, seemed to generate more seizures. (To read about the types of seizures I had, and typical triggers, go here.)

That year and in an attempt to find the source of the seizures, the doctors ran me through every kind of brain test available, including CT scans, MRI’s, and a monitored EEG, where I was removed from meds, hospitalized for a week with electrodes attached to my scalp, and then video watched and monitored.  The hope was that a seizure would trigger and provide data as to where it was originating from within my brain. With that information, they could better target drug therapy or consider surgery to remove the offending part of my brain.  They also performed a cerebral angiogram – feeding a small device in through my femoral artery and up the carotid artery to the base of my skull and injected dye into my brain. They were looking for any kind of obstruction, tumor, plaque – anything in the venous pathways of my brain that could be causing issues.

Through all those tests, they found no obvious reason for what was causing the seizures, nor the large uptick in activity.  At the end of that year, after having spent approximately $135,000 of insurance and personal money, we were no closer to an answer. The doctors wanted me to try a new medication that would take my current prescription bill from $30/month to $600/month, with no idea of whether it would help or how it was any different from the multiple drug treatments I had already tried.

At this point, after all the years of dealing with epilepsy, it felt like my entire life had become all about managing the seizures: any high stress – physical or mental – could bring on a seizure. Being too hungry or too tired – especially 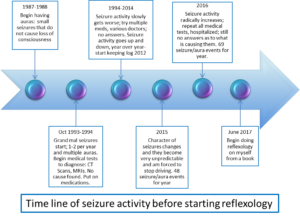 together -- could bring on seizures and I suffered with acute insomnia, unable to fall asleep and then waking several times throughout the night. I had extremely difficult menstrual cycles and seizure activity always kicked up around my period.  Eating too much sugar or drinking too strong of caffeine could cause a seizure. Working out too hard could cause a seizure. Getting too hot in the sun and getting dehydrated could bring on a seizure. My previously very active and outdoor life style of camping, hiking, white water kayaking, mountain biking had narrowed down to almost nothing. Now I was unemployed and unable to drive, and utterly terrified. As you can imagine, I became extremely depressed and felt very trapped with no answers.

And yet, through all of this, I believed that the seizures were a symptom of something gone awry in my body, and not the root cause of all that was going on. I felt that all the treatments and all the meds were only an attempt to treat the symptom and not the base issue and therefore would continue to fail.

By accident one day and looking for a quick way to get rid of a bad cold, I landed on a website talking about Chinese foot reflexology, based on TCM (Traditional Chinese Medicine) meridian theory and all the things it could do for your body (https://chinesefootreflexology.com/ ). For my cold, it suggested that rubbing a set of points on my feet over the course of a few days could help reduce symptoms and strengthen my immune, so I tried it – and my cold was gone in 2 days.

This made me curious – could reflexology make a difference for the seizures? Rubbing my feet to make seizures disappear sounded ridiculous and stupid. Nothing on the website mentioned epilepsy but the author had recently published a book so I picked it up at the library and read it. As she described and taught about reflexology, she had included 2 separate foot routines for the reader to do that worked points in the reflexology system, giving recommendations of how many times a week to do the routines and how long to work each point: one routine took about 6 weeks to complete and the other took about 8 weeks. I did them both.

Within the first month, I felt my body start to calm down. I was still having seizures and auras, but there was a distinct change in my system – the constant vibrating and instability I always felt was easing.  I contacted the author and she was giving a 6 month course on Chinese foot reflexology, based on TCM meridian techniques and reflex points.  I joined the class. I continued to do the routines 3-5 times per week – about an hour per session – and after 6 months the seizure activity had dropped 50% from the previous year – 69 events down to 34 events….in 6 months. It was stunning. 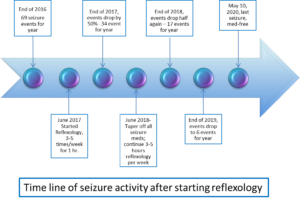 After 1 year of consistent reflexology, I decided to take myself off medication based on what I understood of TCM, and because the meds did not seem to be helping the seizures. This was against my doctor’s advice and I do not recommend anyone to do this without talking to their physician. However, the activity continued to drop, and by the end of 2018 and 6 months with no meds, activity dropped by 50% again. For the year 2019, seizure activity dropped to 6 events for the entire year.

And then -- in just under 3 years of consistent, focused reflexology -- all seizure activity stopped entirely. In 2 years and 11 months I went from 69 seizure events per year at my high point, to seizure- and medication-free, by doing nothing except foot reflexology.

During this amazing timeline as I watched my body heal, I began taking classes in reflexology, and obtained my WA State and National Reflexology Board certifications in Nov 2019.  I left my IT job and opened my own practice in an effort to share this work and hope with other people dealing with difficult health situations.

As reflexologists, we do not promise to heal – in fact, by law, we cannot diagnose, prescribe, or advise medically in any form. I am not even allowed to recommend that you drink a glass of water after a session (but it is a good idea to do so…. :). But I share this story to tell you that our bodies are so strong and they will return to optimal health if we give them the proper conditions in which to do so.  There is so much that is unknown in Western medical treatments. To be sure – Western medicine can do amazing things and sometimes we need those drugs or surgeries – but there is also so much that it doesn’t consider in its treatment options.

Reflexology guided my body back to balance, back to homeostasis. I believe by consistently working the points we retrain the cells back to health. Working the points would bring on deep relaxation and an enormous sense of peace and calm in me. My body would quiet down. And slowly, over time, my body began to release the pattern of illness that had been bound up inside for 30 years and was able to heal itself.